Statement of Faith of United Church of Christ

Our faith walk is guided by the Statement of Faith of the United Church of Christ. It is a biblically-based summary of essential Christian  faith ... but it does not come alive until we begin to live it.

We believe in God, the Eternal Spirit, Father of our Lord Jesus Christ and our Father, and to his deeds we testify:

He calls the worlds into being,
creates man in his own image
and sets before him the ways of life and death.

He seeks in holy love to save all people from aimlessness and sin.

He judges men and nations by his righteous will declared through prophets and apostles.

He has come to us
and shared our common lot,
conquering sin and death
and reconciling the world to him.

He bestows upon us his Holy Spirit,
creating and renewing the church of Jesus Christ,
binding in covenant faithful people of all ages,
tongues, and races.

He calls us into his church
to accept the cost and joy of discipleship,
to be his servants in the service of men,
to proclaim the gospel to all the world
and resist the powers of evil,
to share in Christ's baptism and eat at his table,
to join him in his passion and victory.

He promises to all who trust him
forgiveness of sins and fullness of grace,
courage in the struggle for justice and peace,
his presence in trial and rejoicing,
and eternal life in his kingdom which has no end.

Blessing and honor, glory and power be unto him. Amen. 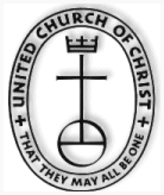 The symbol of the United Church of Christ comprises a crown, cross and orb enclosed within a double oval bearing the name of the church and the prayer of Jesus, "That they may all be one" (John 17:21). It is based on an ancient Christian symbol called the "Cross of Victory" or the "Cross Triumphant." The crown symbolizes the sovereignty of Christ. The cross recalls the suffering of Christ—his arms outstretched on the wood of the cross—for the salvation of humanity. The orb, divided into three parts, reminds us of Jesus' command to be his "witnesses in Jerusalem and in all Judea and Samaria and to the ends of the earth" (Acts 1:8). The verse from Scripture reflects our historic commitment to the restoration of unity among the separated churches of Jesus Christ.

A Prelude on the Statement of Faith

The statement of Faith was adopted by the General synod in 1959, just two years following the United Church of Christ beginning, and a year before the constitution.  It is significant that we wanted to express our common faith before we worried about church structure.  Dr. Roger Shinn, Reinhold Niebuhr Emeritus, Union Theological Seminary, writes:

"....they (General Synod) also knew that one responsibility of a church is to search its mind and declare its convictions.  A belief that is unspoke in incomplete, and a Statement is part of that church's contribution to the life of the wider church in which it seeks to play a responsible part."

The statement of faith is not a "creed," like the Apostles or Nicene creeds.  Creeds are those statements of Faith to which everyone is expected to believe and accept.  Rather, the Statement of Faith is an attempt to phrase the belief in contemporary modes of thought.  "It is not a standard of objective authority in the United Church of Christ.  Whatever authority it has is the authority of an honest testimony whose persuasiveness depends on its contents."  (Roger Shinn, page 7, Confessing Our Faith)  It is best described as a testimony, not a test of faith.

"The Statement has no legal status in the United Church of Christ.  General Synod 'approved' it and 'submitted' it to the conferences, associations, and local churches, not for their ratification but for approval and use.  General Synod 'encouraged' its use in 'congregational worship, in private devotions, and for purposes of study.'  But the United Church of Christ nowhere requires its use"  (Shinn, page 8,op cit)

There have been three revisions:  (1) The original as adopted in 1959, (2) the 1976 version by Dr. Robert Moss, then president of the UCC and dying of terminal cancer, in reponse throughout the church for a more inclusive Statement, and finally (3) the 1981 version written as a doxology addressed to God rather that a statement about God.  The pronoun YOU for God is neither male nor female, but inclusive.

Local churches are the foundational communities in the organization of the United Church of Christ. There are more than 6,000 such congregations, and while they share a common bond, they evolved from different traditions. Those traditions include New England Congregationalists, German Evangelical and Reformed heritages, white American and African American Christian Churches, and ethnic churches organized by the American Missionary Association. They all came together as the United Church of Christ in 1957.

From the constitution of the UCC:

The United Church of Christ acknowledges as its sole Head, Jesus Christ, Son of God and Savior. It acknowledges as kindred in Christ all who share in this confession. It looks to the Word of God in the Scriptures, and to the presence and power of the Holy Spirit, to prosper its creative and redemptive work in the world. It claims as its own the faith of the historic Church expressed in the ancient creeds and reclaimed in the basic insights of the Protestant Reformers. It affirms the responsibility of the Church in each generation to make this faith its own in reality of worship, in honesty of thought and expression, and in purity of heart before God.

Learn more about the United Church of Christ.