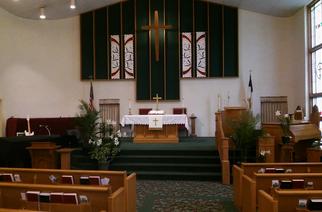 A brief history of Community Congregational UCC of Elburn, IL 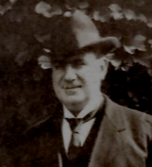 The religious climate in Elburn in 1891 consisted of a handful of churches  defined by their doctrinal differences and social causes.  Apart from these, there were unaffiliated people who identified with the books and pamphlets written by the famous free thinker Colonel Robert Ingersoll, who was known at that time as the "The Great Agnostic.”  Between these two different camps, a small group of people started gathering who longed for a more spiritual church home such that “the old shall dream dreams, and the young shall see visions.”

In the early days, they met at each other’s homes.  In one historical account, a church founder paints a detailed picture of what life was like in Elburn back then, writing,

"Our streetlights were few and far between at the time.  They were simply kerosene lamps in globes on poles … So we quite often carried our own lanterns as we travelled over the wooden sidewalks to committee meetings and conferences at the various homes."

The Community Congregational United Church of Christ of Elburn is called by God to spread the Gospel of Jesus Christ to our community and beyond by serving as His heart, hands, and feet through worship, prayer, Christian education, and mission ministries.

Since then, the church has changed and expanded on several occasions.  In 1959 a new education wing was built that was connected to the church building by an enclosed hallway.

In 1962, the enclosed hallway was replaced by a building addition that doubled the size of the church sanctuary.  As part of the expansion, the sanctuary was reoriented from South to North to East to West.

After so many years and so many changes, Community Congregational UCC of Elburn continues to be the spiritual church home for the Elburn community.

In 1957, the national Congregational denomination merged with other denominations to form the United Church of Christ (UCC).  The motto of the new denomination was, and continues to be, “That they may all be one” (John 17:21).  The UCC upholds the freedom of individual conscience and the importance of local church autonomy.  The name of the church was changed to Community Congregational UCC of Elburn. 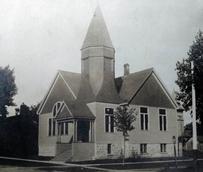 Eventually they hired a pastor, Mr. William Kettle, who was described as “the right man, in the right place, at the right time.”  He was sent by the superintendent of the Congregational churches in Illinois.  Following a worship service in the village hall, the group of 18 members and their new pastor decided to build a church, “for the sole purpose of upholding the God of the Bible in this community.”  The name of the church was The Congregational Church of Elburn.  The people and the pastor participated in building the church.